A soaring number of children with autism or Asperger’s have been bullied or even stolen from by their so-called friends, according to a shocking new study.

Nearly 90 per cent of teenagers with the condition said they had been subjected to ‘mate crime’ – where a vulnerable person is manipulated or abused by someone they believed to be their friend.

Many had been so hurt by the experience it had left them too scared to go out for fear of further bullying.

Scroll down for video

A soaring number of children with autism or Asperger’s have been bullied or even stolen from by their so-called friends, according to a shocking new study (stock image)

In one appalling case, a ‘trusting and honest’ 24-year-old man with autism had left his credit card and PIN number with a so-called friend only for them to rack up a huge bar bill.

Another case saw a man befriended by neighbours who had then stolen from him and used his home to store illegal drugs.

More than half of 12 to 16 year-old who reported feeling taken advantage of by their friends said that they’d been stolen from. For more than two fifths, the bullying came in the form of physical abuse.

While several parents of children with autism or Asperger’s aged between 5 and 11 said they had been forced to move schools by the bullies.

Thirteen per cent of children in the 5-11 age group had also experienced online bullying which jumped to 21 per cent for the 12-16 age group.

The parents of one 14-year-old said their son had been bullied on several occasions by the very people he believed were his friends.

‘This is an ongoing thing which saddens me to the extreme,’ they said. ‘My son cannot distinguish banter from bullying and thinks it’s ok that his so-called ‘friends’ call him names or ‘accidently’ hurt him or get him to do things for their amusement, but he’s just trying to fit in. 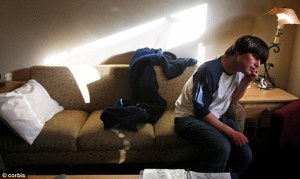 The research also discovered many adults with the condition also feel they are being neglected. The charity warned of the ‘devastating scale’ of abuse and neglect

‘He’s absolutely harmless, extremely vulnerable and it’s so, so hard explaining that people are making fun of him and trying to get him into trouble for their own fun.’

The parent of one young teen said her son had been forced to steal by his friends.

‘He thought he had to do what he was told and complied with demands from so-called friends. Once he was made to steal. He was even made to pull his pants down. He’s had money taken and he’s been threatened. I can’t let him out to play with the kids I don’t know as I feel I can’t trust anyone and he’s so vulnerable.’

Wirral Autistic Charity, who carried out the online study with 141 participants, said it highlighted the shocking abuse being carried out against some of the society’s most vulnerable.

‘The overall picture our survey paints is one of heightened vulnerability amongst people with autism and Asperger’s syndrome to an insidious, hidden form of crime,’ the report stated.

‘Often, the person with autism is unaware that what they consider friendship is potentially an abusive relationship. It is the parents and carers who recognise the issue but then struggle to find the right way to provide support to the individual.’

The most vulnerable age group was 16 to 25 in which every respondent said they struggled to distinguish genuine friends from those who may bully or abuse them.

The signs that could reveal if YOU have autism: Nervous habits and…

Worryingly, research also found that over a third of adults with autism in the survey had been subject to bullying or manipulation of a sexual nature – including being coerced into ‘sexting’.

Around half of adults with autism have been abused by someone they know, a separate study by the National Autistic Society (NAS) found which warned of the ‘devastating scale’ of neglect and abuse.

Around half of the 1,300 sufferers questioned by the charity, as part of a successful campaign to influence the Government’s consultation on Care Act which is now in force, said they had been abused by someone they considered a friend.

People with autism can find it hard to interpret other people’s motivations and as a result can be taken advantage of or manipulated, the charity said.

Speaking at the time, Mark Lever, chief executive of NAS, said: ‘These alarming figures paint a depressing picture of the horrendous abuse and neglect experienced by many adults with autism.

‘We have heard deeply distressing stories of men and women living in utterly intolerable conditions, exploited physically and financially by supposed friends or unable to care for themselves without support.’