When Billy Graham stands before the judgement seat of God, he may finally realize how badly he failed his country, and perhaps his God. On civil rights and the environmental crisis, the most important issues of his lifetime, he championed the wrong policies.

Graham was on the wrong side of history.

The world’s most famous evangelist let his apocalyptic anticipation of the coming kingdom of God blind him to the realities of living in this world. 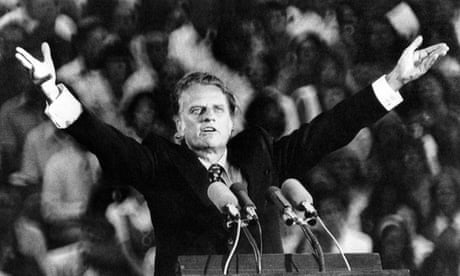 For Graham, the Bible had a clear message for Christians living in what he believed were humans’ last days on earth. Individuals alone can achieve salvation; governments cannot. Conversions change behaviors; federal policies do not.

These convictions shaped the evangelist’s views on civil rights.

In the late 1950s, Graham integrated his revivals and seemed to support the burgeoning civil rights movement. This is the Graham most Americans remember.

But as the movement grew, expanded and became increasingly confrontational, the evangelist’s position changed.

Source: Billy Graham was on the wrong side of history | The Guardian