When Usman Kayani chose to do a PhD in theoretical physics at King’s College London, he felt sure an academic career lay ahead of him. Now two months after completing his doctorate, having suffered from anxiety and depression, he is considering other options.

At first Kayani was the only student who was either black, Asian or from an ethnic minority (BAME) in his research group. Although the group later became a bit more diverse he remembers how that feeling of being different, coupled with a lack of BAME academics and professors he could look up to as role models, contributed to his feelings of anxiety. 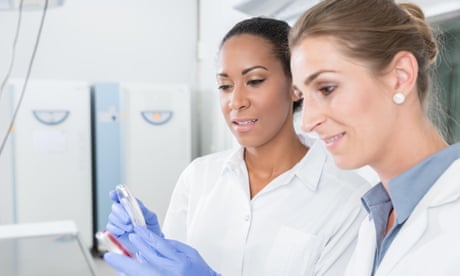 ‘Talented women of colour are blocked’ – why are there so few black female professors?

“It didn’t help my imposter syndrome. I do feel the lack of representation can put people off a career in academia. It’s a vicious cycle,” he says. “My dream was always to stay in academia. Now I don’t know what I want to do and I feel a bit lost.”

As a BAME student, Kayani was defying the odds by doing doctoral research at all. According to an analysis by the Higher Education Funding Council for England in 2016, BAME students are more likely than white students to decide to take a master’s course but less likely to do a PhD. The research found that 2.4% of white students had started a PhD within five years of graduation, compared to 1.3% of their BAME peers.

Last month the UK Council for Graduate Education launched an in depth review looking to establish why more BAME graduates aren’t progressing onto PhDs. The review, which will report next year, will conduct a detailed analysis of student data to understand trends for researching, qualification rates and funding for different ethnicities, as well as to highlight existing schemes which are encouraging participation rates for BAME students.

The fact that more young black students aren’t choosing to do doctorates doesn’t surprise Lynette Goddard, a black academic at Royal Holloway, University of London. She says that in 21 years as an academic she has only supervised three black PhD students. “That tells you something,” she says. When she announced her promotion on her Facebook page, someone commented: “I was never taught by a black lecturer at university so it didn’t occur to me I could do that.”

Source: ‘Look at how white the academy is’: why BAME students aren’t doing PhDs | Education | The Guardian