As yourself I am always skeptical on any Government initiative, especially around the DWP, however, there is always the chance this may be the one to trust no matter what as happened previously.

The sensors will raise the alarm when the temperature gets too low or humidity reaches levels which can cause damp or mould in the trial being carried out in Greenwich, south-east London.

Source: Landlords who allow rented homes to get mouldy or too cold could face sanctions in new crackdown  | Daily Mail Online

Three elderly people are dying every hour awaiting care, according to new research by Age UK.

Care providers hope to get the chance to quiz top politicians over the crisis in social care when they gather for their annual conference in York on Wednesday.

The chances of the UK heading towards a pre-Christmas general election have increased after a shaky truce appeared to have been brokered between the Government and the Liberal Democrats and SNP.

Boris Johnson’s bid to force a general election on 12 December is widely expected to fail on Monday evening as it requires a two-thirds majority in the Commons and Labour is set to abstain on the vote.

A federal judge Friday blocked new regulations that would have let the Trump administration indefinitely detain migrant children and families through the length of their immigration proceedings.

U.S. District Court Judge Dolly Gee of the Central District of California issued a permanent injunction against the Trump administration’s rule, which would have placed no limit on the detention of children and changed the licensing authority for facilities housing them.

Gee found the regulations violated the terms of a 1997 settlement known as the Flores agreement that sets standards for the treatment of migrant children, including that they must be released from non-licensed facilities within 20 days.

“Defendants cannot simply ignore the dictates of the consent decree merely because they no longer agree with its approach as a matter of policy,” she wrote.

The judge added that to seek relief from such a decree, the government would have to demonstrate that a change in law or facts rendered their compliance illegal or impossible, or through a change in law from Congress.

“Having failed to obtain such relief, Defendants cannot simply impose their will by promulgating regulations that abrogate the consent decree’s most basic tenets,” she wrote. “That violates the rule of law. And that this Court cannot permit.”

For years, the General Motors plant in Lordstown, Ohio, employed 8,000 workers in the Mahoning valley.

In a rust belt region that has become synonymous with industrial decline, following the closure of its once mighty steel mills in the 1970s, the presence of the Chevrolet factory in Lordstown, and its well-paid manufacturing jobs, was particularly important. 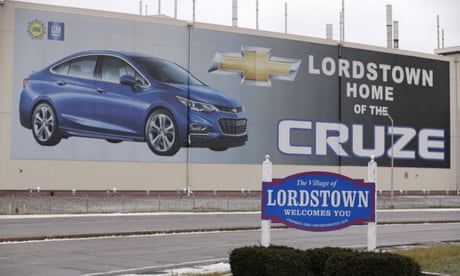 ‘A kick in the stomach’: massive GM layoffs leave workers distraught – and angry

Then, late last year, GM abruptly shut the plant. The company had already scaled back workers at the Lordstown plant, and this closure saw 1,500 workers, the last of the once huge workforce, out of their jobs.

“I think it’s devastating,” said Mark Sweetwood, the managing editor of the Vindicator newspaper, which serves the Mahoning valley.

“I think it was the last holdout of our industrial age.”

The news was just the latest blow in a slow, painful decline in this area. The rust belt was a boom area at the start of the last century, but has suffered more than most from the outsourcing of jobs overseas. Stories of places like Lordstown abound in the midwest, and the angst and anger here is something Donald Trump was able to tap into in 2016 and that helped propel him into the White House.

I think it was the last holdout of our industrial age

The closing of the Lordstown factory came after GM said it would cut 14,700 jobs across four plants in the midwest and Canada. That announcement, in November 2018, was in stark contrast to Trump’s election pledge to bring back auto jobs to the region.

Today the plant, which looms behind a “Welcome to Lordstown” sign at the entry to the village, stands as a testament to the hollowness of that promise. In mid-August it was possible to drive into the complex, where huge parking lots – once full of new cars, but now completely empty, with brown weeds growing from cracks in the concrete – stretch as far as the eye can see.

On one side of the factory was a huge sign declaring: “Lordstown, home of the Cruze”. The plant was clad in dull yellow corrugated metal panels, adding to a sense of gloom on a grey, drizzly day.

Lordstown is a small place, essentially a village with a gas station. Warren, five miles north, is more what one would traditionally think of as a town, with a main street, businesses and an impressive 19th-century county courthouse. Away from the pretty town center, however, some of the narrow roads are lined with abandoned homes, while buildings are in varying states of disrepair.

Source: ‘It’s devastating’. End of GM in Ohio town as Trump fails to bring back midwest jobs | Business | The Guardian