The Constitution provides Congress with plenty of tools to hold the White House to account. So what moves does the legislative branch have left?

Source: Well, impeachment didn’t work – how else can Congress keep President Trump in check? : The Conversation

The last century has seen a well-intentioned, but largely self-defeating, attempt to improve the honesty, responsiveness, and accountability of our political system by spending more on it. Instead, we have seen the rise of an increasingly well insulated professional political class, the hollowing out of voluntary parties, and the creation of an institutional ratchet which is dragging political thought to the statist establishment left.

1911 saw the first Parliamentary pay structure introduced in an attempt to curb what were perceived to be unaccountable outside influences on MPs’ political priorities and decision-making. It was also an attempt to widen access to political careers. The second of these reasons, however, does not really stand up as a justification. This reform happened at a time when such access was already widening considerably, largely as a result of the “outside influences” – or independent interests, such as trade unions, cooperative societies and philanthropists. The widening access we have seen over the past century would be likely to have occurred anyway. So, we are left with a system which depends for its legitimacy on the somewhat contentious proposition that the last century has seen a profound and remarkable rise in the honesty and fairmindedness of our Parliament.

The payroll for our MPs, in turn, led to allowances for Peers, MPs’ expenses, and the proliferation of MPs’ staff, and most perniciously of all, Short Money.

Clearly Parliamentarians and their staff must be paid but each extension of the taxpayer’s largesse has helped to establish a career path for the so-called “career politicians” of tabloid ire and a largely unaccountable ecosystem of policy advisors, researchers and party staff insulated from outside influences, contributing to the increasing disconnect between political decision-makers and the wider community. As with any institution, these party machines have developed their own independent interests and agendas.

Yet another problem with Universal Credit, why are there so many problems, are the Civil Servants who provide guidance to Ministers not up to the job, or is it Ministers ignoring the advise, or both? Will we ever know as no one is ever held accountable.

Accountability needs to be a priority as does Legislation to be drafted correctly and when problems do occur for these to be dealt with expeditiously so not to cause hardship on the vulnerable.

If her fight in court is successful, it could help hundreds of self-employed claimants. A mum who claimed that Universal Credit would have left her with £8.98 a month has won the right to fight her case in the High Court.

Charmaine Parkin, 34, was today granted permission to challenge the former Judicial Review against the Department for Work and Pensions (DWP). If the case is successful, the DWP may be forced to change their system – which will affect hundreds of thousands of self-employed claimants.

Charmaine’s lawyers claim that Mimimum Income Floor (MIF), which is a key part of the benefit for self-employed people, is ‘unjustified discrimination’ and ‘irrational’. The DWP estimated last year that 400,000 self-employed claimants would be hit by MIF by 2022 – which would get rid of over £1billion a year from their…

Originally posted on Govt Newspeak:
It comes after housing associations demanded action from the DWP to close the “bizarre” loophole. Universal Credit could face an overhaul over an issue that housing associations warn will lead to thousands losing out on a week’s rent. Head of Policy at the National Housing Federation: “It’s a really serious situation.…

The DWP is practising the ‘3 Wise Monkeys’ here is what ‘A DWP spokesperson said: ” We are committed to ensuring that people with a health condition or disability get the support they’re entitled to.

“Since PIP was introduced there have been 3.7 million decisions made and of these only 5% have been overturned at appeal. “In most successful appeals, decisions are overturned because people have submitted more oral or written evidence.” ‘

The evidence is there, as shown in this article and they have the audacity to say the above.

This is why I state they are practising the ‘3 Wise Monkeys’ for they are “see no evil, hear no evil, speak no evil”.

The DWP have to change, so that a supporting welfare system can emerge, for currently it is not supporting for everyone who needs to be supported.

What the DWP is doing should be a crime and those at the DWP and also the DWP would be guilty of committing criminal acts, as it is, currently, not so, then there needs to be accountability, where there is honesty, openness and transparency.

How four seriously ill Teessiders battled the DWP and won their PIP benefits back.
Caseworkers in Anna Turley’s office have worked hard to win back what seriously ill claimants are entitled to

The heartbreaking case of a Teesside woman being refused disability benefits despite living with three brain tumours was highlighted in the House of Commons this week.

But Redcar MP Anna Turley and her team of caseworkers have to deal with similar cases almost every day.

The Labour MP shared the stories of four Teessiders last year , who had been denied the personal independence payment (PIP) after medical assessments – and how her team had helped them win on appeal. She said that more than £450,000 has so far been won back for her constituents .

Ms Turley described the current system as “failing” vulnerable Teessiders, who are being “made to suffer” and wait months for decisions to be…

The Benefits and Work website have reported that a number of their members in recent weeks have been been made to go through a second Personal Independent Payment (PIP) assessment before a decision is made on their award, because there was a problem with the first assessment report.

One member faced a two hour assessment on Christmas Eve. In January they were contacted by Capita and told that the assessment was “incomplete” and that someone was to be “sent round to finish it.”

Capita have refused to say what information was missing and would not provide a copy of the report until it was complete.

I agree with everything you say.

Yes, the Blue Badge systems needs reviewing and it would be ideal for Blue Badge users to be part of the revision system and not on a tokenistic basis, but on a co-design basis.

Co-production would be even better.

Yes. local authorities need more money for an abundance of projects and not be subjected to yearly swinging cuts, blamed on austerity, the cut reason for cuts, but over the years there have been many other reasons.

When will they ever work together, but then when will local authorities ever, effectively work with their own population.

I volunteer my own time to many projects, be they local authority, local health authorities, including CCG and numerous voluntary and Charity sector organisation.

I do get very disheartened, but have the mindset that the next time will be different, but it never is, but to not be involved you could miss the once in a life time opportunity when it may be.

I am a carer of two disabled relatives and I know the frustration of blue-badge abuse, even taxis wait in the disabled bays at my local supermarket. 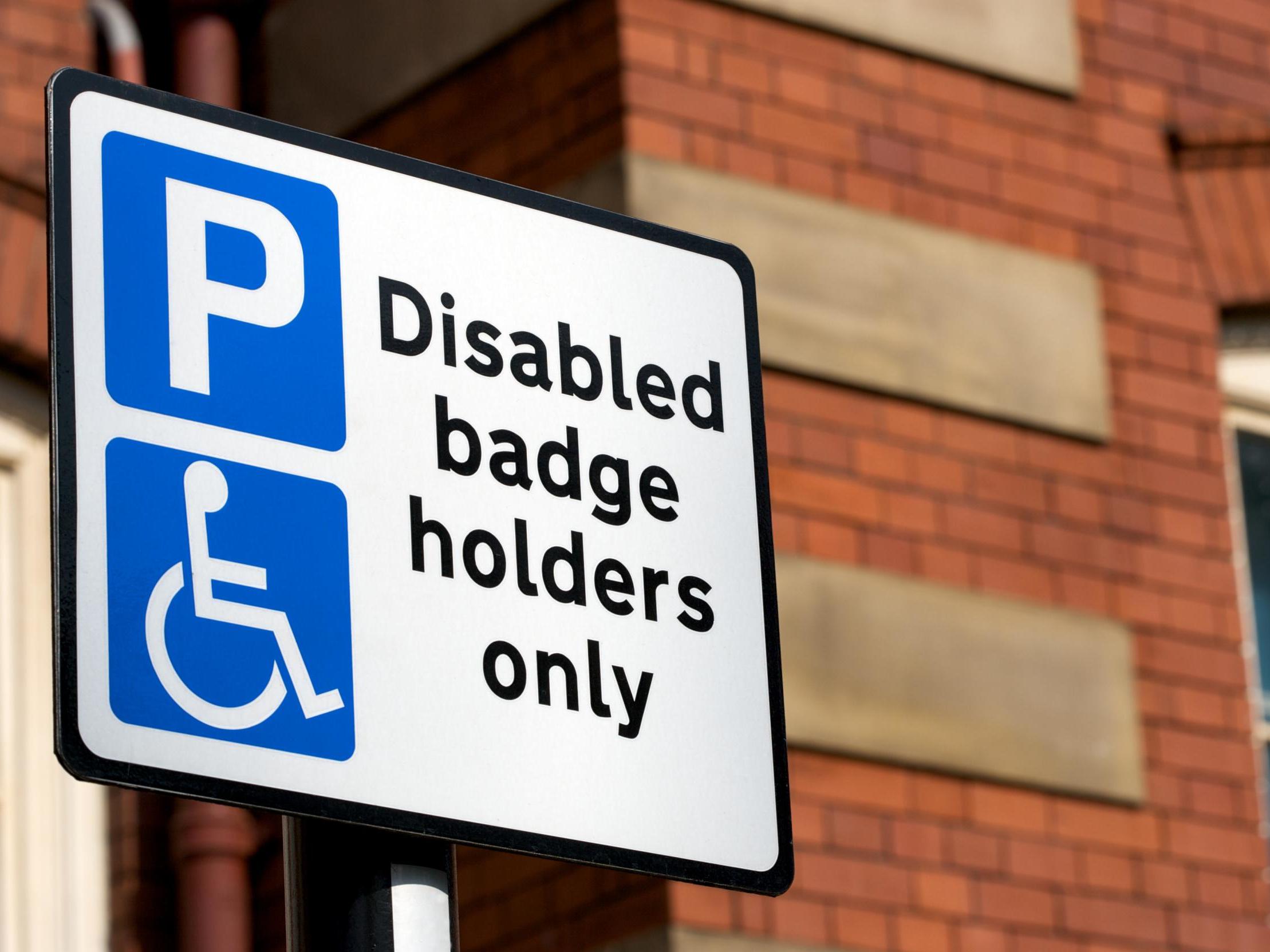 How disabled people like me suffer due to blue badge abuse and underfunded local authorities
Four years, one wheelchair and multiple colourful walking sticks since my diagnosis, I still haven’t worked out how to ‘look disabled’

A few months ago, a friend sent me a car sticker. Not a standard gift for your average 31-year-old girl-about-town, but it gave me a much needed laugh: “My Doctor Knows Why I Need a Disabled Parking Permit. You Don’t Need To.”

Four years, one wheelchair and multiple colourful walking sticks since my diagnosis with Ehlers-Danlos syndrome, and I still haven’t worked out how to “look disabled”. Spontaneously dislocating joints, I have nailed. Juggling pain medications, fatigue and a career, I’m getting my head around.

We need to ensure that there is no door to shut, Tory Esther McVey is only there because she was voted in by her constituents and could be out by 2020 or even earlier.

What is urgently required is that accountability needs to be incorporated into Ministerial positions and a challenge re accountability should be made available for constituents to be able to trigger as in the case of MPs writing letters of no confidence in respect of Prime Ministers.

At our third Stronger Together event, we brought together families and providers, along with some colleagues from NHS England to look at what makes a difference and what can we do now.  It wasn’t about changes in legislation, it was about transforming the way we work and working with what we have.

Let’s be honest, legislation without true accountability is as useful as an ashtray on a motorcycle.

When it didn’t go well.

Source: Relationships between families, providers and commissioners [2] – Bringing Us Together

When will appropriate action be taken against the DWP for these cases keep surfacing but no one is held accountable.

This strengthens my agruement that this whole process is geared to kill claimant, which is a sure fire way to reduce the benefits costs.

The DWP should be held on a charge of Murder.