Vote Leave, support Brexit as you can not trust the IMF.

If you vote yes it is not for the status qou as the EU is for ever changing and the bigger it gets the less say individual countries will have. Brexit is the only way for the UK to decide its future, so Vote Leave. 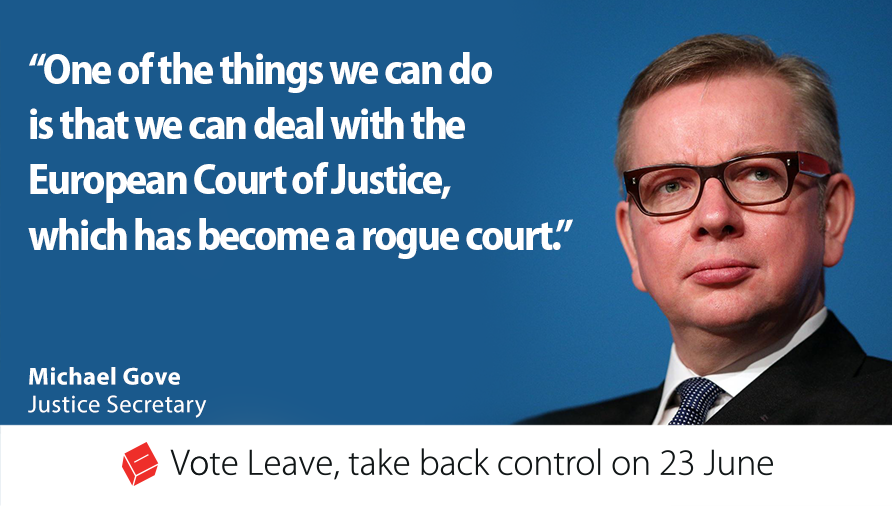 Imagine if we Vote Leave in 45 days’ time… We can take back control of our courts and deport dangerous criminals who are currently protected by EU law.

Boris Johnson made an important speech today making it clear why we should take back control from the EU. He said that the Prime Minister’s renegotiation had not changed our relationship with the EU, and that it proved that Brussels is incapable of reform  He also called on the Government to stop its ‘campaign of subterfuge’, to conceal the scale of constitutional changes involved if we voted to stay in the EU.

He addressed the premise that Britain would fail economically outside the EU, and said that it was an ‘absurd’ concept that Britain has no power to conduct its own trade negotiations and do deals with fast growing economies around the world.  He highlighted the fact that the Single Market has not delivered what was promised and pointed out that from 1992 to 2011, there were 27 non-EU countries whose exports of goods to the rest of the EU grew faster than the UK’s.

The In campaign wants us to stay in an EU that is unreformed and going in the wrong direction. Staying in the EU means handing over more money and more control to Brussels. It means even greater pressure on our public services through increased migration. That is why it is the safer choice to Vote Leave on 23 June.

This weekend, Michael Gove highlighted the dangers of the European Courts having a say over our intelligence services and its ability to rule on what data we can share with our allies like the US and Australia.   He pointed out that Britain’s intelligence network with the Five Eyes Alliance (USA, Canada, Australia and New Zealand) is the cornerstone of the fight against the global terror threat, not the proposed new structures the EU wants to create, which would undermine these valuable and established alliances.

David Cameron delivered a speech today and made the ludicrous claim that leaving the EU and taking back control would somehow lead to war. This smacks of desperation from a campaign failing to make the case for the EU and our continued payment of £350 million to Brussels every week.  The PM’s words are deeply ironic given the EU’s own border agency says the EU’s borderless policy is making the whole of Europe less safe.

If we Vote Leave on 23 June, we will be able to act quickly to protect our national security.  We would be able to make our intelligence agencies and the Armed Forces exempt from EU law, free us to deport unworthy EU citizens and put an end to the multibillion tax refunds to big business, the savings from which could be spent on our public services.

UK schools under pressure from rise in migration

Migration is putting increased pressure on all our public services including schools which are struggling to cope with the influx of thousands of children from the EU.  John Pullinger the government statistics chief admitted that one in every 15 schoolchildren born in Britain is of migrant parents.  This amounts to nearly 700,000 children who have a parent who is a citizen of another European country, which is twice the total of 2007.  In order to accommodate this massive influx, we need to build 27 new secondary schools or 100 primaries.

There are a further five countries including Turkey, with a combined population of over 80 million currently applying to join the EU.   Our public services are already under huge strain.  After we Vote Leave on 23 June, we can take back control and spend the £350 million we send to Brussels every week, on our priorities such as education.

We must create an EU army, says senior MEP – Mail

Loss of freedom if we vote to Remain

‘The 14-page document, to be sent to 27 million homes, is designed to respond to public demand for more details about the EU referendum by setting out the facts behind the government’s position.’