Amid the personal family tragedy on Thursday, when the Queen died at the age of 96, a small domestic drama was playing out involving the Duke and Duchess of Sussex .

A very sad occasion for everyone, especially all of the royal family. All except Harry were informed, but Harry later, all others had someone close with them to help with grief, but not Harry. Harry has been cast out in more ways than one, some of his own making, but some by the Royal Family. Harry, it is said was very close to his grandmother, so will need to be comforted very much, which can only be done by his wife.

The Royal Family are ignoring the needs of Harry at a time when everyone needs people around them,especially family.

The support system so many rely on was struggling before the coronavirus crisis. Now it is truly broken

Source: Lockdown has brought families of learning disabled people to their knees | Learning disability | The Guardian

Li Jingzhi quit her job to search China for her son, Mao Yin, who went missing in 1988.

Groups campaigning for women’s and LGBT rights took the streets of Verona on Saturday as church leaders and pro-life activists met for a conference on family values.

The protesters were there to oppose the World Congress of Families, whose self-declared goal is to restore what it calls the “natural family order”.

“In Italy there is currently a very serious attack against all the rights and freedoms that have been conquered by women,” demonstrator Maddalena Saccone said.

“There is talk of taking back the freedom of abortion, divorce and family law. These are struggles that were thought to have already been won.”

Police were deployed outside the conference and a counter-demonstration — by groups supporting the conference’s aims — was also held.

Olimpia Tarzia, an anti-abortion activist, said: “(The Congress) wants above all to restore meaning and value to what the family is, the reconciliation of women between lifetimes and work times and the true freedom of women.”

The three-day conference in Verona is funded by the local council and is backed by the far-right League Party, which is a partner in Italy’s current populist coalition government.

Thank you for bringing us into your life and showing us no matter what comes along other experiences will occur which may be better than those previously.

We live our lives not only for ourselves, but also for others and together we have more of a chance of coming through. 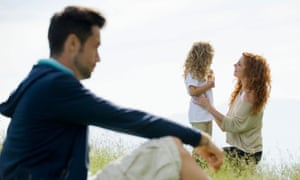 Divorcing parents could be denied contact with their children if they try to turn them against their former partner, under a “groundbreaking” process being trialled by the Children and Family Court Advisory and Support Service (Cafcass).

The phenomenon where one parent poisons their child against the other is known as parental alienation, the ultimate aim of which is to persuade the child to permanently exclude that parent from their life.

Cafcass said it had recently realised parental alienation occured in significant numbers of the 125,000 cases it dealt with each year.

Sarah Parsons, the assistant director of Cafcass, said: “We are increasingly recognising that parental alienation is a feature in many of our cases and have realised that it’s absolutely vital that we take the initiative. Our new approach is groundbreaking.”

The new approach will initially give parents the chance to change their behaviour with the help of intense therapy. Alienating parents who do not respond will not be allowed to have their children live with them.

In addition, contact between the parent and child could be restricted or refused for a number of months. In the most extreme cases, the alienating parent will be permanently banned from any contact with their child.

Parental alienation is estimated to be present in 11%-15% of divorces involving children, a figure thought to be increasing. Other research has found that about 1% of children and adolescents in North America experience parental alienation.

UK judges are increasingly recognising the phenomenon. One wrote about a case where she was forced to transfer residence to re-establish a relationship between a child and an alienated parent. “I regard parental manipulation of children, of which I distressingly see an enormous amount, as exceptionally harmful,” she said in her summary.

Parental alienation occurs on a spectrum from mild to extreme, all of which can be extremely damaging to the children involved. Experts admit they are only now beginning to understand the range of ways it manifests itself.

Parsons said: “We have reached a much clearer position on parental alienation recently, which we want to send a very clear, strong message about.

“The current, popular view of parental alienation is highly polarised and doesn’t recognise this spectrum. We want to reclaim the centre ground and develop a more nuanced, sophisticated understanding of what’s going on.”

Parental alienation occurs almost exclusively when parents are separating or divorcing, particularly when legal action is involved. It is, however, different to the common acrimony between divorcing parents and is internationally recognised as a distinctive form of parental psychological abuse and family violence, undermining core principles of the Universal Declaration of Human Rights and the UN convention on the rights of the child.

In the US and Canada, “parenting coordinators” are ordered and supervised by courts to help restore relationships between parents and children identified as alienated. In Mexico and Brazil, alienating a child from a parent is a criminal act.

Until now, cases of parental alienation in the UK have relied on Cafcass caseworkers recognising incidents on a case-by-case basis. Many parents, however, say their experiences of alienation have been missed or compounded by the social work and family court system, often leading to permanent estrangement from their child.

From spring 2018, all frontline Cafcass caseworkers will be given a new set of guidelines called the high conflict pathway, which will itemise the steps social workers must take when dealing with cases of suspected alienation. The pathway will spell out exactly when children should be removed from the alienating parent and placed with the “target parent”.

The guidelines, which will also affect how cases are dealt with in family courts, were sent out at the beginning of this month to judges, lobby groups including Families Need Fathers, experts, doctors and lawyers for a three-month consultation.

Alongside the guidelines, Cafcass has developed a 12-week intense programme called positive parenting, designed to help the abusive parent put themselves in their child’s position, and give them skills to break their patterns of behaviour.

A trial of it will start shortly, with 50 high-conflict families being sought across the country. After an evaluation in spring, the programme will be rolled out nationwide.

If it does not work, psychiatrists, psychologists and mental health experts will be brought in. If the alienating parent continues to perpetuate the abuse, however, contact with their child will be limited to supervised visits.

In extreme cases, care proceedings will be initiated and the parent will lose contact with their child. “Our priority, however, is to preserve the relationship with both parents,” Parsons said.

“The demonising of a parent has long been recognised as damaging the child not only at the time of separation, but reaching into his or her adult life,” he said. “Parental alienation is identified as the single biggest issue among those who come to FNF seeking help.”

“I’ve lived through and witnessed the inexorable alienation of my older daughter over the past five years, which has culminated in complete loss of contact. I will not have seen or heard from her for three years this coming January. We had a fantastic, loving relationship for the first 12 years of her life.

“I know from what my younger daughter has told me that in numerous insidious and not so insidious ways, my ex-wife put an intolerable amount of stress on my eldest daughter. It eventually became too emotionally traumatic for her to see me. She eventually sent me a short email, saying she wanted to break off all contact with me. I’ve not heard from her since.

“The pain of being subject to parental alienation as a target parent is a truly soul-destroying thing to live through. In my darkest days, I can remember being out driving at night and thinking that maybe I just wouldn’t turn the wheel when I came to the bend with the high stone wall. This is a horrible form of child abuse that is struggling to get out from under the rock of prejudice and ignorance.”

Source : Divorcing parents could lose children if they try to turn them against partner : The Guardian

The poor side of life

Today’s demo started rather hurriedly and to be honest I didn’t know if I was coming or going. This feeling was amplified because it was cold, rainy and my daughter was a bit fed up. understandable of course. But she soon settled down into our usual routine and all was well.

We are seeing a lot of new faces due to Stalybridge Jobcentre shutting. They don’t know us and what we are doing, and we don’t know them or their situations either. So we have to start from scratch, which at times isn’t easy.  But it’s a whole lot harder for them.

I started a conversation with a man who had been previously attending Stalybridge Jobcentre for his appointments. The first thing that he said to me was that he couldn’t believe how rude the front desk staff are at  Ashton Jobcentre, and how rude some of the advisors are also…

Novelist David Mitchell looks back on the heartbreak – and joy – of learning to live with his son’s autism. Plus, an extract from the book that helped him

Source: David Mitchell: learning to live with my son’s autism | Society | The Guardian

A view of things to come or is it, for over the last 40-50 years many inventions have been showcased but do they ever come to reality. If they do would they be in the price range of the average consumer, whoever they may be.

Although it is good to have aspirations, but then you have to have a realistic outlook and dream of what may be.

I have seen the future of the American toilet, my friends, and let me tell you it is spectacular.

I only stopped in the Kohler Design Center Monday afternoon because my niece wanted me to join her and she’s very cute.

Until I walked through those showroom doors, my previous interest in bathroom plumbing only involved toilet paper and whether enough of it remained on the roll. I recently ordered a kitchen faucet because ours broke, and I also once watched the fascinating (and expensive) process of a plumber yanking a Fisher-Price little person out of our tub drain.

That, and potty training four children, pretty much sums up my command of the commode community.

I saw things beyond my imagination (and, I’m sure,  beyond, the capabilities of our circa 1931 pipes).

An infinity bathtub fed by a…