Childbirth is miraculous, beautiful, traumatic, and overwhelming, all at the same time, for both the baby and the mother. But for many children born today, squeezing through the birth canal is the easy part. Soon after birth, males born to North American women routinely face amputation of a fully functioning, healthy organ – the foreskin.

Circumcision is so commonplace in North America, it has long been considered the norm. The World Health Organization estimates the male circumcision rate in the U.S. to be 76% to 92%, while the rates in most of the Western European countries are less than 20%. Globally, more than 80% of the world’s men are left intact. An intact penis is not rare – an intact penis is the norm.

Medical professionals tell parents that circumcision is relatively painless, just a snip and it is over. Nothing could be further from the truth. Aside from the rare but possible complications, which include mutilation of the penis or death, the practice of circumcision is painful and traumatic.

A Tory MP who angered colleagues after blocking a bill to make upskirting illegal has objected to an amendment that would toughen the laws against female genital mutilation (FGM).

Sir Christopher Chope objected during the second reading of an amendment which would have altered the Children Act to allow the courts to issue protection orders if they are concerned a child may be at risk of FGM.

Sir Christopher shouted “object” when the bill was read out in the Commons on Friday, leading to an audible groan from other MPs, despite being under pressure to allow it to pass through the house.

Asked not to object

He objected to the bill during its first reading in November and, as a result, campaigners contacted him to request that he not do the same again.

Ahead of the reading, campaigner Nimco Ali texted the MP asking him not to stand in the way of the bill’s passage, saying: “I do hope you understand… the need to give girls at risk all the protection possible”.

A 10-year-old girl has died after undergoing female genital mutilation in Somalia, the first confirmed death in years in a country where complications from the procedure are generally denied, activists claim.

Deeqa Dahir Nuur was taken on 14 July to a traditional cutter in the her village of Olol, roughly 65km from Dhusmareb, in central Galmudug state.

The operation severed a vein, and when the family were still unable to stem the haemorrhaging two days later, the girl was taken to Dhusmareb hospital, where she bled to death, said activist Hawa Aden Mohamed of the Galkayo Education Centre for Peace and Development.

The Galmudug state minister for women’s affairs visited the family in hospital to offer condolences and explain the risk of death in FGM operations.

But action over Deeqa’s is unlikely. “The woman who performed the operation has not been arrested, but even if she was, there is no law that would ensure she is punished for the act,” said Mohamed.

“It is difficult to estimate the number of girls who die due to FGM per month or per day because they are [sworn] to secrecy, particularly in rural areas. We only get to hear of the few cases of those bold enough to seek medical treatment in towns. But from the stories we do hear, they could be in their dozens.”

The death is the most high profile confirmed in Somalia, where 98% of women and girls are cut, the highest percentage anywhere in the world. Activists hope the publicity surrounding her death may help debunk myths in Somalia that FGM is safe.

The number of women and girls in the United States potentially facing or who have already suffered mutilation has grown threefold since 1990, according to a government report.

Source: With 500,000 female genital mutilation survivors or at risk in U.S., it’s not just someone else’s problem – The Washington Post

Save the ‘F’ World 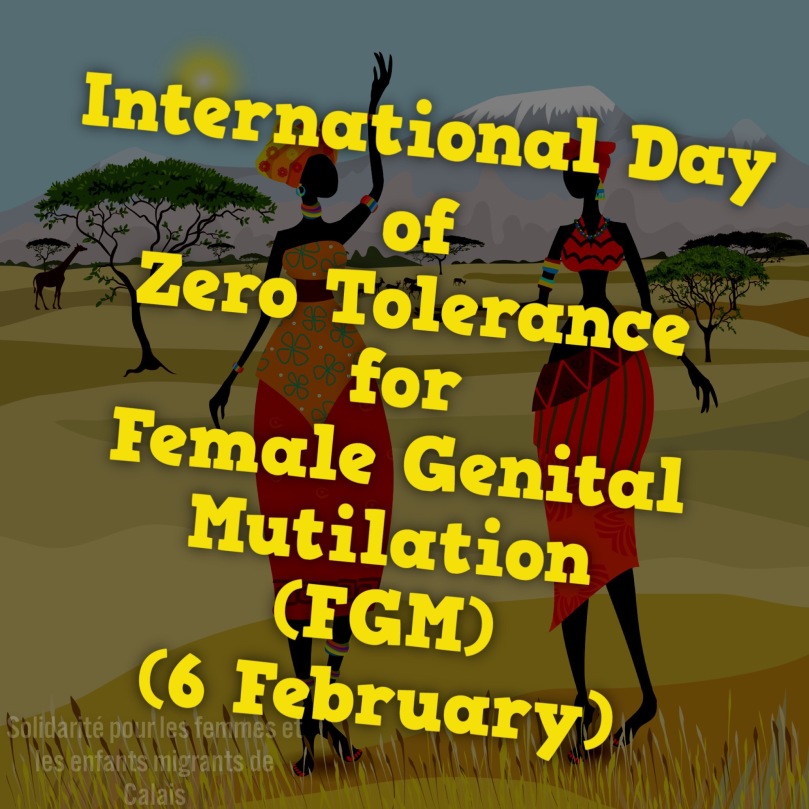 FGM is a torture to the female as it is widely depicted to destroy womanly dignity of the person cut. There are four types. The women are permanently disfigured irrespective of the minimisations of the cutting at any of these stages.

Today, the public focus is women and girls fleeing wars in their nations. Nevertheless, there is another kind of female refugees.

While some are fleeing as results of persecution of all sorts, some females are running away from the being mutilated.

Feminists’ debates are divided over this topic. Despite strong opposition to FGM practices within several European sectors, many argue about the need to respect the customary pattern of ethnic groups involving in FGM.

What is a crime then? The FGM practices or the persistence of it?

AFAMBO, Ethiopia – Asiya Hamed spent much of her life performing female genital mutilation (FGM) on girls in her community. She cannot remember how many girls she has cut, but she knows what the consequences have been.

“Girls and women suffered from urine- and menses-retention complications due to the physical condition created by FGM,” she said. She added that, because of this practice, women have faced life-threatening complications during childbirth.

Of course, she did not know all this when she was performing FGM. As a circumciser and traditional birth attendant, she believed she was helping the women and girls under her care.

But around two years ago, she received training from the Afar Pastoralist Development Association – which has partnered with UNFPA to raise awareness of the harms caused by FGM – and the Afar Region’s Women, Children and Youth Bureau.

“The trainings have revealed to me how much I have been subjecting women and girls to suffering out of ignorance,” Asiya said.

Today, she is working to mobilize people against FGM and child marriage, using her own experiences as a circumciser to persuade them.

Asiya is part of a programme being piloted in Ethiopia’s Afambo District, where FGM traditionally takes place at infancy – often when girls are just seven days old.

The programme, supported by UNFPA and partners, educates communities about the dangers associated with FGM and child marriage, helping them make the decision to abandon these traditions.

As part of this effort, Asiya serves on a committee in her ‘kebele’, or locality, dedicated to raising awareness of these issues. Such committees have been established in seven localities in Afambo, often including a representative from the local administration, a clan elder, a religious leader, an ex-circumciser and a youth representative.

Despite harms, many resist change

FGM can cause shock, haemorrhage and infection, and it can lead to prolonged labour, excessive bleeding during childbirth, and even death. Child marriage also harms girls’ health. Many child brides become pregnant before they are physically mature, leading to increased risk of pregnancy and labour complications.

Still, it is difficult to convince people to let go of these traditions. Some believe they are religiously required. Others believe that FGM and child marriage will deter pre-marital sex, which they say would bring disgrace to their families and clans.

There are few penalties for people who opt to continue these practices. Some parents and circumcisers have been taken to local authorities after FGM is performed, but many are released with a pardon. And the region where they live – Afar – has not yet adopted a law setting 18 as the legal minimum age of marriage.

Even though she has become an ardent advocate on these issues, Asiya is still occasionally asked to perform FGM.

“I tell them that I will never, ever think of subjecting a girl to the harms and suffering of FGM,” she said.

Despite these challenges, Asiya says people are slowly being convinced to end child marriage and FGM.

Her experiences as a circumciser and traditional birth attendant give credibility to her arguments, and she speaks with authority about the damage she has witnessed.

She now also encourages women to give birth in health facilities, under the care of skilled birth attendants such as doctors or midwives, rather than at home.

“When I come across a pregnant woman in labour in my community, I make sure that a call is made to the health centre in our vicinity for an ambulance to be sent,” she says.

Her efforts have helped convince influential community members that the health, happiness and human rights of girls and women must be prioritized.

Even after a lifetime of performing FGM, Asiya shows them, it is never too late to change one’s mind.

As part of this allocation, Refuge has been awarded two lots of funding; £7,393 for a project on forced marriage and ‘honour’-based violence based in Hackney and Derby; and £5,951 for a project on FGM based in Lewisham. These projects aim to raise awareness of FGM, forced marriage and ‘honour’-based violence and empower professionals to better support victims.

It is currently estimated that each year in the UK, over 20,000 girls under the age of 15 are at risk of female genital mutilation, and that 66,000 women are living with the consequences of FGM (NHS, 2014). In addition, the government’s Forced Marriage Unit was alerted to over 1,300 possible or actual forced marriage cases in 2013 alone, involving a total of 74 different countries.

Sandra Horley CBE, chief executive of national domestic violence charity Refuge, says:
“Refuge is delighted to have been awarded funding by the Department for Communities and Local Government. Every year in the UK thousands of women and girls are at risk of female genital mutilation, ‘honour’-based violence and forced marriage. Refuge knows that in many circumstances victims are not being reached.

“We will be using this funding to run informal training and awareness raising events on forced marriage, ‘honour’-based violence and female genital mutilation events throughout 2015 in Derby Hackney and Lewisham. It is vital that we raise awareness of these crimes, so that people understand their rights – and know how to access support. Professionals working with vulnerable adults and children must also be trained to recognise the warning signs. This will empower them to identify potential victims, and refer them on to specialist support services which are often nothing less than life-saving.”

Communities Minister Stephen Williams said:
“I first became aware of female genital mutilation when a teacher came to one of my MP surgeries and I was introduced to a group of girls who had decided to campaign against FGM. I was horrified at what I heard about this deeply embedded cultural practice. This practice has no medical benefits; indeed it results in great pain and distress as well as causing medical complications during child birth.

“That’s why I am proud that this government is making good on its pledge at the International Girl Summit to invest in these valuable projects, which will change hearts and minds in local communities, train frontline workers and help bring an end to this terrible practice.”

To see which other projects were awarded funding, see this interactive map created by the Department for Communities and Local Government.  ……….’