I agree with most of this post, however, in my 60 odd years of life on this earth I have found that there are not many politicians in who you can believe in, be they red, blue, green, purple, orange, yellow and others. However, there are some in which there is some form of belief and others practically none. They all promise the earth and unfound riches in their manifestos and only when they assume power can the truths be revealed.

You cast your vote and hope for the best.

Regarding Brexit nothing has come forth as we have not Brexited and will not be doing so until March 2019 or may be not, depending on whether there will be a transition deal or not.

Everything is so up in the air and no one on either side in the UK or Europe can be sure of the final outcome. We can all speculate on what the outcome or outcomes will or can be and who will be in power if and when we do or not do Brexit.

That length of string is getting longer or is it shorter, day by day.

This is another fascinating little video from RT’s Going Underground. Host Afshin Rattansi talks to the former cabinet minister under Blair, Chris Smith, above his decision to oppose the Invasion of Iraq, his work in the Advertising Standards Authority, and Brexit.

Smith was Blair’s Culture Secretary, and the author of a book, Creative Britain. The cover showed him wielding a professional movie/TV camera. He states he opposed the Iraq invasion because it was ‘obviously the wrong the policy’. He also states that during his time with the Advertising Standards Authority, people wrote in asking them if they could possibly act against the misleading political advertising in elections. Smith states that this is sadly impossible. Their constitution limits them to commercial advertising only, and they have no power to prosecute or punishment politicians that lie.

On the subject of Brexit, he and Rattansi clearly hold different views. Smith appears…

Osborne will not be happy until everyone of us is in some form of employment , whether it is suitable or not.

When he feels this as been achieved for adults, he may then turn his attention to children. The tories are wishing to return to Victorian values, so having children in a working environment could easily be part of his thinking.

Same Difference has been aware for some time that it is difficult for claimants to use the toilet at the JobCentre. We have never agreed with the policy.

But we didn’t realise, until reading respected blog Vox Political this afternoon, that there are actually  no public toilets in Job Centres.

Nor is there a private area for benefit claimants who have to inject medication.

So, readers, we ask you, what does someone with diabetes do when they won’t make it home from the JobCentre in time to inject their insulin?

Pay for a public toilet near the jobcentre, if they can find one? Inject in public, trying to ignore the stares of people who think they are injecting drugs of another kind in a public place?

Or delay their dose to avoid embarrassment, leading to potentially life threatening situations?

A response to a Freedom of Information request… 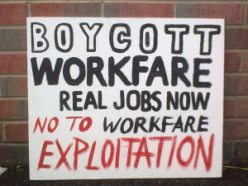 The DWP have finally released some scant information on the performance of  George Osborne’s Help To Work scheme – the £300 million workfare programme announced at the 2013 Tory Party conference and then quietly scrapped in last month’s Autumn statement.

Those sent on Help To Work can be expected to sign on everyday at Jobcentres, face intensive and mandatory ‘interventions’ supposed to help them find work or in many cases be sent on an unpaid ‘Community Work Placement’ for six months.  Previously published statistics revealed that such is the unpopularity of workfare amongst charities and community organisations that these placements could only be found for half of those referred to the scheme.  What they didn’t tell us is how many people had found jobs.  It is only now, 20 months after Help To Work began and in a week when most journalists are pissed or on holiday, that the…

Disabled activists are to hold a protest about a new government scheme that will see mental health therapists installed in a south London jobcentre.

Members of the Mental Health Resistance Network (MHRN) are also furious that a new “Living Well Hub”, providing access to Lambeth’s community mental health services, is set to open on a separate floor of the building where the jobcentre is based.

The network, and supporters – including members of Psychologists Against Austerity and theAlliance for Counselling and Psychotherapy – will march on Streatham jobcentre in south London on Friday (26 June) to highlight what they see as government attempts to “re-educate” people with mental health distress.

The protest comes after the journal Medical Humanities – co-owned by the British Medical Journal – published an article criticising the view that being unemployed was “evidence of both personal failure and psychological deficit”.

The article suggests that countries implementing major welfare reforms – such as the UK – are increasingly attempting to force “complete and intimate behaviour change” on unemployed benefit claimants through “coercive and punitive” methods.

One government intervention is a project – announced in March’s budget – that will “co-locate” therapists from the NHS’s Improving Access to Psychological Therapies (IAPT) programme in more than 350 jobcentres, providing “integrated employment and mental health support to claimants with common mental health conditions”.

The first jobcentre to host these IAPT therapists is in Crown House, Station Approach, Streatham, the same building as the new Lambeth Living Well Hub (LLWH).

LLWH, which is set to open on 29 June, is run by a collaborative which includes healthcare providers, local authorities, charities and service-users.

Its aim is to “keep people well and out of hospital”, and act as “a new ‘front door’ to mental health services in the borough”.

MHRN has sent an open letter to individuals and organisations, asking them to back their opposition to the location of LLWH in Crown House and the co-location of therapists in jobcentres.

The letter says: “Mental health service users are already reporting higher levels of fear, anxiety and anguish as a result of the increasingly difficult welfare benefits system, which is linked to an increasing rate of suicides.

“This situation will be exacerbated by the new developments.”

The letter says that psychological therapies are “ineffective” if they are forced on people, and need to take place in “safe, unthreatening environments”.

It adds: “We are concerned that people will be sanctioned (ie have their benefits stopped) if they do not co-operate with this ‘therapy’ either out of principle or because they are not well enough.”

Robert Dellar, an MHRN spokesman, said: “People with mental health issues are absolutely terrified of jobcentres, of work capability assessments, sanctions, and having their dole stopped and threatened.

“People are just going to be too scared to access services if the Hub is based in the same building as the jobcentre.”

David*, who has received services through the collaborative, said: “The jobcentre is a very traumatising place.

“The way DWP have been treating people with mental health problems and assessing them and [carrying out] work-focussed interviews is very oppressive and very forceful, and now they are opening these health services in [the same building as] a jobcentre.

“That is causing people a tremendous amount of distress. These services are meant to support you when you are in distress. The two do not meet. I personally would never go there [to the Hub].”

A spokeswoman for South London and Maudsley NHS Foundation Trust, speaking on behalf of the Lambeth Living Well Collaborative, claimed that they were “not aware of or involved in any pilot at the jobcentre involving mental health or talking therapies”.

She added: “Streatham Jobcentre Plus hosts many organisations within the building.

“The decision of the collaborative to locate the Hub on the third floor of Crown House was one based on the need for adequate space for the service and cost.

“There are no plans for formal links between the Living Well Hub on the third floor and the jobcentre on the ground floor of Crown House.”

Despite her claims, a document on the collaborative’s website states: “The job centre building was chosen as the location for the Hub as there was free available office space and there was an opportunity to train job centre staff to help them work better with people with mental health issues.”

The spokeswoman refused to say whether the trust was comfortable with the government’s pilot project, or with the Hub being located in the same building as the jobcentre.

*Not his real name

Hi I’m Aden, I work at DisabledGo as the Digital Marketing Manager and I manage the blog and all social media channels.