The minister for disabled people has admitted to complete ignorance about the model that lies at the heart of his government’s programme of disability benefit reforms. Justin Tomlinson was asked what his thoughts were about the biopsychosocial (BPS) model of disability in a question-and-answer session at a meeting of the all-party parliamentary disability group on Tuesday. Ministers have repeatedly spoken of how the BPS model is central to their disability benefit reform programme, and successive governments have relied on it to justify slashing disability benefits for more than a decade. Ellen Clifford, from Inclusion London, told the meeting – while Tomlinson was out of the room voting – that the BPS model would be “underpinning” the government’s health and work green paper, which will be published later this year. She said that comments by new work and pensions secretary Stephen Crabb earlier in the meeting about the need for closer integration between work and health showed that

The new minister for disabled people has brought forward plans to roll out the government’s new disability benefit to those with the highest support needs, despite continuing lengthy delays for thousands of claimants.

The Department for Work and Pensions had been planning to start in October reassessing people with indefinite or long-term disability living allowance (DLA) awards for their eligibility for the new personal independence payment (PIP).

But the new minister for disabled people, Justin Tomlinson, announced today (Thursday) that these reassessments would instead begin for some claimants in some postcodes in the northwest of England and the Midlands – those beginning BB, BL, DE, LE, M, OL, PR, ST, WA and WN – next month (13 July).

The government’s target is that all existing working-age DLA claimants will have been reassessed for PIP by late 2017.

PIP has already been rolled out across Britain for new claimants, and those who choose to claim PIP instead of DLA, those whose circumstances change, and those whose DLA award has come to an end, including children reaching the age of 16.

In a written statement, Tomlinson said he had decided to bring forward the last stage of the PIP rollout after new government figures published last month showed that the average waiting time between someone returning their assessment form and having their assessment was now just four weeks.

He said: “This improved performance means I am pleased to announce that we are now in a position to begin the final phase in July, initially at small volumes and in a limited number of areas.”

But his announcement came only two weeks after Disability News Service (DNS) revealed that reception staff at one of the two companies assessing people for their PIP eligibility had been sent scripts telling them how to explain to claimants why their appointments have been cancelled.

Disabled people across Wales and central England are turning up for pre-booked appointments to be assessed by Capita for their eligibility for PIP, only to be told that their appointment is no longer available due to “assessor availability”.

Because of a shortage of assessors, the outsourcing giant is having to recruit 90 more healthcare professionals, just five months after making an estimated 80 of its 400 assessors redundant.

DNS first began reporting on delays and backlogs in the PIP system in late 2013. In January this year, one disabled woman described how she had been forced to wait more than 14 months to be assessed.

But Tomlinson has boasted of the “massive improvement” in the system and claims that ministers took “swift action” to correct earlier problems, and “drove the assessment providers to make radical improvement to their service”.

Earlier this month, the high court ruled that work and pensions secretary Iain Duncan Smith had been “unreasonable”, “irrational” and acted “unlawfully” by delaying PIP payments to two disabled people for up to 13 months.

Hi I’m Aden, I work at DisabledGo as the Digital Marketing Manager and I manage the blog and all social media channels.

So Justin Tomlinson is the new Minister for Disabled people, the 5th Minister in 5 years. Much has been said over the past few days about his voting record, but what is maybe more striking is his total lack of interest in disability issues as evidenced by his Parliamentary record. This did not prevent him voting, and sometimes very strongly, in a way which has made life much more difficult for disabled people, either in favour of the bedroom tax, against raising benefits in line with prices, or paying higher benefits over longer periods for those unable to work due to illness or disability etc.

The press and social media have picked up on two of his most inhuman votes in the House of Commons:

The refusal to make an exception for those with a cancer diagnosis or undergoing cancer treatment from the 365 day limit on receiving contributions-based Employment and Support Allowance, which means that these claimants are only entitled to one year of support, and to refuse to set the lower rate of the Universal Credit payment in relation to disabled children and young people at a minimum of two-thirds of the higher rate.  Read a very good article by Jenny Morris which explains the twisted thinking behind it

Nor does he seem to be very keen on human rights and equality for all, and voted in 2012 to repeal the Human Rights Act 1998, and to remove the duty of the CEHR (Commission for Equality and Human Rights) to work to support the development of a society where people’s ability to achieve their potential is not limited by prejudice or discrimination and there is respect for human rights.  Put otherwise, he is not opposed per se to prejudice or discrimination.

His full voting record is here: https://drive.google.com/file/d/0B9mlh9-2YHH4aUJJcV8zWW5ibmc/view What a nice chap!

While there is no doubt that the new Minister for Disabled People is not of the progressive type, his voting record reveals what has been the main objective of this government over the past five years, which is to reduce the welfare bill and specifically the disability benefits component. Behind all the rhetoric of disabled people being stuck on disability benefits (disproved by statistics), of disability being a ‘lifestyle’ choice, and of helping disabled people to achieve their potential by ‘helping’ them get a job, what his appointment highlights is one of the greatest failures of this government. After tightening even further a disability assessment devised under Labour and geared to reduce the claimant count by 1 million, after restricting the duration of entitlement for people receiving contributions based ESA to 365 days, after putting disabled people through 4.8 million assessments, and after applying sanctions to 3000 disabled people each and every month as admitted by McVey in her evidence to the W&P Committee  Q248 , the claimant count today is roughly similar to what it was in 2010 and the government had to constantly revise its expenditure forecasts.

Not only is the number of disability benefit claimants on the rise, but contrary to what the government would like us to believe, the number of disabled people who moved into work, although on the rise, has not narrowed the gap between the employment rate of disabled and non disabled people. And all this in spite of a very visible government campaign #disabilityconfident, which has made no difference whatsoever.  At the same time, the government has been reducing the support disabled people need to work or to go to work: Access to Work has been initially reduced and now capped, the Independent Living Fund will close at the end of June 2015, and 3,000 out of 8,000 users have lost their motability vehicles following the introduction of PIP.

With this appointment, the government is flying its true colours. But disabled people have proved to be proud and defiant. They have not gone away quietly. They have been fighting, challenging the government and exposing it for what it is.  Whether it is on the streets or on social media, disabled people have made disability a visible issue, and have exposed the callousness of this government.  With £12bn of welfare cuts in the pipeline, the fight must go on. 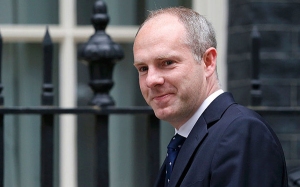 The new government has downgraded the importance of the role of the minister for disabled people, just days after winning the general election.

The ministerial post had previously been a junior ministerial role until the October 2013 appointment of Mike Penning, who became a minister of state.

At the time, Penning said: “Making this a senior ministerial post shows the government’s commitment to disabled people and ensuring everyone can get on in life.”

His successor as minister for disabled people, Mark Harper, was also a minister of state.

But following last week’s announcements by prime minister David Cameron of his new government, it has emerged that the new minister for disabled people, Justin Tomlinson, will be merely a junior minister, or under-secretary.

Kate Green, Labour’s shadow minister for disabled people, said: “What disabled people need and deserve is a minister who understands the issues, commands respect of colleagues and will stand up for their rights.

“Downgrading the role in government calls into question the importance David Cameron gives to the interests of disabled people.”

Since his appointment, Tomlinson has not responded to a request from Disability News Service for an interview.

Despite Penning’s comments in 2013, a spokesman for Number 10 said: “The status of the office of minister for disabled people remains unchanged.

When asked whether this contradicted the remarks made by Penning, he refused to comment further.

Hi I’m Roisin Norris, Digital Marketing Executive at DisabledGo and I will be uploading blogs and news for you all to read.