A Government department is investigating whether the felling of thousands of street trees in Sheffield has been carried out illegally, The Yorkshire Post can reveal.

The Forestry Commission has confirmed it is investigating the entire programme of tree-felling work being undertaken by Sheffield City Council as part of its £2.2bn highways maintenance contract with Amey, which is known as the Streets Ahead project.

The Government’s newly appointed “tree champion” Sir William Worsley, who has been appointed in part to prevent the unnecessary felling of street trees, told The Yorkshire Post today he will “consider the findings of the investigation carefully” once it is completed.

In 2001 there were 1.3bn trees in England. That’s 25 for every person in the country, the highest numbers since the first world war. One article predictedthat in 2020 there would be more trees in England than in 1086, when 15% of the country was cloaked in woodland. Part of the reason for this buoyant outlook was the country’s response to the great storm of 1987. We mourned for our ancient yews and the beeches of Chanctonbury Ring. Petitions were drafted, many thousands of saplings were planted. We rebuilt our woods with solemn and impassioned dedication.

The predictions will not fall short. Across the UK, the number of trees has sharply increased. In 2015 there were 3bn trees, the equivalent of 47, a sizeable copse, for every person, around twice as many as in 2001. These statistics might evoke a bosky eden where the wild wood is reclaiming the land, yet recent years have also seen a return of large-scale felling, with Network Rail’s plans to cut down millions more trees the latest example. 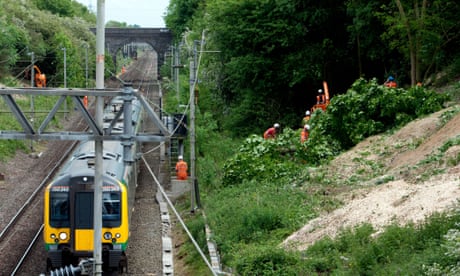 Network Rail’s view of trees is understandable. Leaves on the line can cause trains to overshoot stations, and branches and entire trees falling on to tracks cause delay or halt journeys. Between March 2016 and March 2017, 233 trains collided with fallen trees. The effect on customers cost the company hundreds of millions of pounds in compensation per year.

But it is unlikely that Network Rail or Sheffield council – which has felled around 6,000 trees as part of a project to “improve the condition of the streets” of the city – have considered the impact on humans caused by the removal of so much verdure. Research shows that time spent among trees causes levels of the stress hormone cortisol to decrease, lowers blood pressure, increases the number of active natural killer cells, so boosting immune function – and improves mood and concentration. In Japan, shinrin-yoku, or “forest bathing”, is a widespread approach to improving physical and mental health. Many of these beneficial effects are delivered by both phytoncides – volatile oils released by plants and trees to fend off infection – and by contact with beneficial soil bacteria.

Source: We can’t keep chopping down trees without harming ourselves | Emma Mitchell | Opinion | The Guardian

McDonnell listening to conference and the membership, pledging to scrap PFI and buying existing contracts out is toppling a testament to the neoliberal capitalist system.

Immigration and an ageing population have placed unprecedented pressure on the NHS, writes DR MAX.

I am from Sheffield and this was a deplorable act by Sheffield City Councilors, but that is not unusal in their dealings within Sheffield for in many respects they feel they are a law to themselves and have no respect to the populas of Sheffield.

Amery should never have been awarded the contract, especially on a PFI basis, for now they can do as they please in the name of profit, whether this be for the good of Sheffield or not.

PFI contracted should be made ilegal, as they were an ill thought out idea which Labour introduced,as while, they may have been a good way to initially introduce new introstructure,however, the penalty clauses that are contained within them should future changes be required creare enormous costs for those who have to live with the resultant situation.

Profit to the few and no benefit for the many.

Mike over at Vox Political has put up another important piece reporting a filibuster in parliament to ‘talk out’ a bill by the former leader of the Green party, Caroline Lucas. The four Tories, who waffled and blustered in order to prevent the bill being discussed or passed, were David Nuttall, Phillip Davies, Phillip Hollobone, and Sir Edward Leigh.

It’s hard to think of Philip Davies without imagining that the people of Shipley were so disillusioned with Parliament that they sent a motion of the bowels to Westminster as a sign of their low esteem.

The sh*t from Shipley was one of four Tory MPs who waffled their way through the time allotted for Caroline Lucas’s Bill to stop the creeping privatisation of the National Health Service.

By their actions it is therefore easy to conclude that Davies, Philip Hollobone, David Nuttall and Sir Edward Leigh want to…