Slavery “was the necessary evil upon which the union was built,” the Arkansas senator said in an interview.

In recent years, voters have shifted their views on issues based upon the positions of politicians – even when that shift clashes with their ideology.

Source: Americans on the right and left change their minds after hearing where Trump stands : The Conversation

Hillary Clinton got the most individual votes from US citizens in 2016, but Donald Trump won the most electoral votes.

Native American voting groups have made it their mission over the years to get as many of their members to the polls as possible. That effort has even greater urgency, as North Carolina prepares next week to hold one of its most closely watched elections ever.

Ahead of next Tuesday’s vote, tribal members have been knocking on doors to encourage their neighbors to get out to the polls. Working with the Native voting-rights group Four Directions, more than two dozen members of the Lumbee tribe have been hired to visit every home on the reservation, and to even drive people to the polls if necessary.

Just 26% of eligible Native voters cast ballots in last year’s election. Harvey Godwin Jr., chair of the Lumbee Tribe, told ThinkProgress that there are various reasons that fewer Native people turn out at the polls than he would like, and not all of them have to do with voter suppression.

An award-winning chef who cooked at the 2012 Olympics and has served the Royal family has been refused the right to remain indefinitely in the UK after Brexit despite having lived in the country for 15 years.

Damian Wawrzyniak, 39, a Polish national, was expecting to have his Settled Status application approved without any problems when he made his application as he has lived in the UK well past the five-year threshold required for permanent residence.

But he was surprised when the Home Office said he had only been awarded pre-Settled Status, which is generally for EU nationals who do not have five years of continuous residence in the UK.

Mr Wawrzyniak, who lives just outside Peterborough, said he submitted his application last week, alongside his partner and her two parents.

‘I feel not good enough’

“Straight away I was told to give more proof – things like bank statements – which I sent back to them,” he told i. “Then I received this letter today saying that I had not been approved.

“It made me feel not good enough for this country which I have given my life to for 15 years. I have cooked for the royals twice, I worked at the London 2012 Olympics, but apparently that is not good enough.”

Source: Top chef who served Royals and worked at 2012 Olympics ‘doesn’t qualify for Settled Status’ despite living in UK for 15 years : iNews

Thirty years ago, in Price Waterhouse v. Hopkins, the Supreme Court held that “sex stereotyping” is forbidden by a federal law banning employment discrimination. “We are beyond the day,” Justice William Brennan wrote in the court’s plurality opinion, “when an employer could evaluate employees by assuming or insisting that they matched the stereotype associated with their group.”

Nevertheless, the Trump administration filed a brief last week asking the Supreme Court to bring back the day when an employer could evaluate employees by assuming or insisting that they matched the stereotype associated with their group.

The Trump Justice Department’s position in R.G. & G.R. Harris Funeral Homes v. EEOC wouldn’t nuke Price Waterhouse entirely. But it would severely weaken protections against sex discrimination, and give employers broad new authority to fire employees who do not comply with stereotypes about how people of a particular gender should appear.

It would do so, moreover, in service of the broader goal of denying civil rights protections to transgender workers. The thrust of the Trump administration’s position in Harris Funeral Homes is that, if existing law is broad enough to protect trans workers from discrimination, then that law must be rolled back — even if doing so will legalize a fair amount of discrimination against cis women in the process.

Source: The Trump administration wants to make it easier to fire women who act too ‘masculine’ – ThinkProgress

Wednesday’s session started with the testimonies of Catalan government officials and ended with the beginning of the “expert phase.”

– Jordi Martínez Soler, a social media advisor for the Parliament, explained that he managed Forcadell’s social media accounts in Autumn 2017 and explained the content of the tweets he tweeted during that time.

– Ricard Gené, who was part of the Catalan National Assembly (ANC)’s secretariat at the same time as Carme Forcadell, explained that the role of Forcadell, currently accused of rebellion, was as a ”representative and not an executive.”

“Forcadell was not involved in elaborating the ANC’s roadmap,” he said.

– Rosa Maria Sans, who is the head of management of the use of government facilities and equipment by non-profit organizations at the Catalan Department of Labour, Social Affairs and Families, explained how was his work during the 2017 Autumn.

The Brexit Party has declared itself victorious in the European parliament elections after emerging as the front-runner and winning 28 seats up for grabs in the UK.

Nigel Farage, leader of the party, said politicians in Westminster should take this as a warning that the UK wants a “clean WTO Brexit” and does not want to delay its departure from the EU any longer.

Source: Who won the European elections in the UK? Leave vs Remain and what the results tell us : i News

Theresa May will resign as Conservative leader and Prime Minister on 7 June, clearing the way for her successor.

The rumblings of a leadership contest began some time before Mrs May’s official announcement, with Esther McVey, Rory Stewart, and Boris Johnson already declaring they would be standing.

And now that a date has been confirmed more candidates are expected to come forward.

Source: Conservative leadership candidates: the Tory contenders in the running to replace Theresa May as Prime Minister : i News

Speaking to Jewish Republicans on Saturday, Donald Trump claimed a Democratic victory in 2020 could be damaging for Israel. In response, the executive director of a group representing Jewish Democrats lamented the president’s “assault on decency and truth” and criticised his remarks about the impending Israeli election. 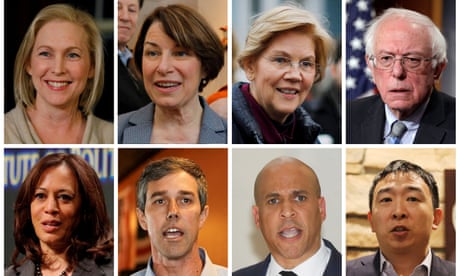 Speaking at the annual meeting of the Republican Jewish Coalition (RJC), Trump touted two precedent-shredding actions: moving the US embassy to Jerusalem from Tel Aviv and the recognition of Israeli sovereignty over the Golan Heights.

“We got you something that you wanted,” Trump said, adding: “Unlike other presidents, I keep my promises.”

The RJC backed Trump in 2016. It is backed by Sheldon Adelson, a casino magnate and rightwing megadonor. On Saturday, Trump met Adelson before speaking. Adelson and his wife received a standing ovation when they entered the ballroom.

In 2016, the Adelsons gave Trump $30m. They followed that with $100m for Republicans in 2018. In November, Miriam Adelson joined Elvis, Babe Ruth and other famous Americans in being awarded the Presidential Medal of Freedom.

“I know that the Republican Jewish Coalition will help lead our party to another historic victory,” Trump said. “We need more Republicans. Let’s go, so we can win everything.”

Jewish voters are often liberal but Republicans hope to narrow the gap. Trump earned standing ovations for the embassy move and the Golan Heights recognition.

The speech came weeks after he suggested Democrats “hate” Jews, following an internal fight among Democrats over comments about Israel by Ilhan Omar of Minnesota, one of the first Muslim women elected to Congress, that some claimed were antisemitic.

It emerged this week that a New York man who said he “loved” Trump has been charged with threatening to kill Omar.