Many British people are ignorant about how racism works. Yet when black people try to explain, our experience is denied, says Guardian columnist Afua Hirsch

Source: The ‘playing the race card’ accusation is just a way to silence us | Afua Hirsch | Opinion | The Guardian

The number of old people will increase, while the proportion of white Americans will continue to fall.

Source: 3 big ways that the US will change over the next decade : The Conversation

Presidential addresses in the wake of national tragedies are typically attempts to heal and unite. For critics of Donald Trump, it was more a case of wondering how much more damage he might do.

Standing in the diplomatic reception room at the White House after a weekend of bloodshed in America, the US president declared: “For critics of Donald Trump, it was more a case of wondering how much more damage he might do.”

But he also went on to rail against “gruesome and grisly video games”, warn of “the perils of the internet and social media” and demand reform of mental health laws. He also veered off teleprompter and named Toledo instead of Dayton as the scene of one of the mass shootings. And missing from the speech was any mention of background checks on gun buyers or any hint of inward reflection or acceptance of responsibility that his own racist rhetoric might be a contributory factor. 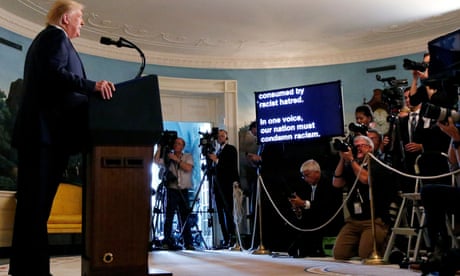 Trump blames ‘glorification of violence’ but not guns after mass shootings

But just as the notion of a lone wolf with a gun is inadequate to explain the attack in El Paso, Texas, that left 22 people dead, so is the notion of a lone wolf in the White House. None of this would be possible without the compliance of Republicans. The tragic events of the past weekend have, critics say, displayed once again the moral collapse of one of America’s two great parties. It is Trump’s all the way, its rebels silenced, retired or dead.

Cowed by his fervent base, a handful of Republicans offered criticism last month when Trump tweeted that four congresswomen of colour should “go back” to their countries. Senator Mitt Romney used Twitter to call the remark “destructive, demeaning, and disunifying” but, when a reporter asked him in person if the comments were racist, he turned on his heels. Others, such as Senator Lindsey Graham of South Carolina, amplified the crude message.

The voices of dissent were raised just a little more when, at a campaign rally, Trump supporters chanted “Send her back!” about the Somali-born congresswoman Ilhan Omar of Minnesota. The president himself condemned the chant, which echoes the anti-immigrant tea party insurgency from the Barack Obama era, only to almost instantly praise his fans as “incredible patriots”.

Source: Trump gets it wrong on mass shootings, but Republicans deserve the blame | US news | The Guardian

These nostalgic recollections, however, aren’t held by all Americans.

Municipal swimming pools and urban amusement parks flourished in the 20th century. But too often, their success was based on the exclusion of African Americans.

As a social historian who has written a book on segregated recreation, I have found that the history of recreational segregation is a largely forgotten one. But it has had a lasting significance on modern race relations.

Swimming pools and beaches were among the most segregated and fought over public spaces in the North and the South.

White stereotypes of blacks as diseased and sexually threatening served as the foundation for this segregation. City leaders justifying segregation also pointed to fears of fights breaking out if whites and blacks mingled. Racial separation for them equaled racial peace.

These fears were underscored when white teenagers attacked black swimmers after activists or city officials opened public pools to blacks. For example, whites threw nails at the bottom of pools in Cincinnati, poured bleach and acid in pools with black bathers in St. Augustine, Florida, and beat them up in Philadelphia. In my book, I describe how in the late 1940s there were major swimming pool riots in St. Louis, Baltimore, Washington, D.C. and Los Angeles.

Exclusion based on ‘safety’

Despite civil rights statutes in many states, the law did not come to African Americans’ aid. In Charlotte, North Carolina, for example, the chairman of the Charlotte Park and Recreation Commission in 1960 admitted that “all people have a right under law to use all public facilitates including swimming pools.” But he went on to point out that “of all public facilities, swimming pools put the tolerance of the white people to the test.”

His conclusion: “Public order is more important than rights of Negroes to use public facilities.” In practice, black swimmers were not admitted to pools if the managers felt “disorder will result.” Disorder and order defined accessibility, not the law.

Source: The forgotten history of segregated swimming pools and amusement parks : The Conversation

Since the settlement of Jamestown in 1607 and the start of the Colonial period, the U.S. has been predominantly white.

White nationalists want America to be white again. But this will never happen. America is on its way to becoming predominantly nonwhite.

The U.S. federal government uses two questions to measure a person’s race and ethnicity. One asks if the person is of Hispanic origin, and the other asks about the person’s race.

A person is defined as white if he or she identifies as being only white and non-Hispanic. A minority, or nonwhite, person is anyone who is not solely non-Hispanic white.

Source: The US white majority will soon disappear forever : The Conversation

Last week mass deportations resumed in Britain. It’s less than a year since the Windrush scandal broke – and the review into the events leading up to it hasn’t even reported back yet. This was a stark reminder that the government’s “compliant environment” policies have changed in name only: otherwise they remain as hostile as ever and continue to destroy the lives of black and ethnic minority people (BME) people – many of whom have lived in the UK since they were children.

Before the deportation flight the home secretary, Sajid Javid, declared that many of the “foreign national offenders” on the flight had committed “very serious crimes” – but soon after this the Home Office admitted that most of the deportees had committed minor crimes such as single drug or driving offences. More worryingly, 13 people on the Jamaican charter flight had come to the UK as children – nine of them were under the age of 10, 11 had indefinite leave to remain (ILR), and one person even had a British passport. Not only were most of the people on this flight “more British than foreign”, they were also being punished twice (three times if you include immigration detention) for crimes they had already served sentences for.

The arrival of the Empire Windrush at Tilbury docks on June 22, 1948 marked a watershed moment in the recent history of immigration to Britain. The day before the ship arrived from the Caribbean, the Evening Standard sent an airplane to photograph the vessel as it approached Britain. The photo appeared on the front page under the headline: “Welcome to Britain! Evening Standard plane greets 400 sons of Empire.” But the reception of the new arrivals was far from unequivocally positive.

Now, 70 years and three to four generations later, the legacy of those who arrived on the Windrush and the ships that followed is being rightly remembered – albeit in a way which calls into question how much their presence, sacrifices and contributions are valued in Britain.

Racism is truly alive and kicking in British society, not least in liberal, progressive universities. This was evident in early March when a black female student released a video of people shouting “we hate the blacks” outside her room in her halls of residence. Unfortunately, this incident is far from isolated.

In my new book, I examine how race and racism continue to disadvantage those from black and minority ethnic backgrounds both in universities and wider society. By virtue of their racial identity, such groups are positioned as outsiders in a society which values and privileges whiteness.

In Britain, policies that attempt to be inclusive actually portray an image of a post-racial society, in which racial inequalities and racism no longer exist. In reality vast inequalities between white, black and minority ethnic communities continue to exist. They exist in the access to the labour market, in schools – and in higher education.

Source: Why a post-racial British society remains a myth – even in universities : The Conversation

Las Vegas is the rule, not the exception.

Source: When we talk about mass shootings, we are talking about white men – ThinkProgress

A great and true thought and one that we should all aspire to.

Helen Keller Says: “When indeed shall we learn that we are all related one to the other, that we are all members of one body? Until the spirit of love for our fellow people, regardless of race, color, or creed, shall fill the world, making real in our lives and our deeds the actuality of human brother- and sisterhood, until the great mass of the people shall be filled with the sense of responsibility for each other’s welfare, social justice can never be attained.”