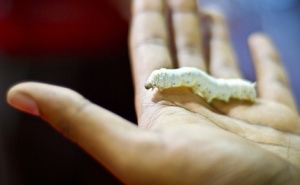 It’s pretty obvious why some people choose not to eat meat or wear fur, but why someone wouldn’t use silk is just plain baffling to most. So here’s the deal.

When we think of silk we imagine beautiful gowns, delicate underwear and lavish furnishings, what we definitely don’t picture is live silk worms being plunged into vats of boiling water. And why would we? This certainly isn’t going to make us want to reach for our wallets, instead it is likely to make us reel with disgust.

The Plight of the Silk Worm

Just prior to the metamorphosis stage where Bombyx Mori silk worms transform into moths, they spin fibers to create their cocoons. Naturally, the moth would chew its way out of this cocoon once the transformation is complete, but the problem this poses to the silk manufacturing industry is this natural development would result in chewed silk strands that are much shorter and less valuable than the intact cocoon. Which is why when the silk worms are in their pupa stage after being fed a strict diet of mulberry leaves, they are placed while still alive into boiling hot water, killing them and starting the process of unraveling the cocoon to produce silk.

Ahisma is another method of silk production that don’t include death for the silk worms. Although not resulting in death, there are still ethical issues surrounding the domestication and farming, such as adult moths being unable to fly because their bodies are too large and males unable to eat due to undeveloped mouth parts.

Some among us will try to claim that silk worms don’t matter and that they are just insects. While it’s true that we have a limited depth of understanding about insects, what we do know is that they have the capacity to feel and the right to live free from pain and suffering.

Give Peace Silk a Chance

If you’re a lover of silk then fear not as you don’t have to go without. Peace silk is a cruelty free, fairtrade alternative that is woven by hand in India. This animal-friendly silk is harvested from the cocoons of the wild and native Eri moth. The cocoons are collected from the forest after the moth has emerged and flown away, meaning no one has to be kept in captivity.

Peace silk is becoming the fabric of choice by many designers worldwide as people open their eyes to the plight of the silk worm, which is good news for you. A quick internet search will reveal a whole host of producers so there is no excuse not to buy your silk from an ethical source.

If you prefer to avoid animal products altogether, there are other alternatives available. Lyocell, silk cotton, ceiba tree filaments and milkweed seed pod fibers are all eco friendly options worth exploring.

The dark and disturbing world of silk worms isn’t one that gets much media coverage, beause the industry believes that we simply don’t care enough to care, but that doesn’t have to be the case. You can reject these inhumane practices and opt to buy cruelty free alternatives instead. We do not need to exploit insects, or any other animal for that matter, and no amount of whitewashing will justify using these tiny beings as resources for our own ends.    ………………’

Peace will only come by non-violent action and peace is required to save further slaughter on both sides. Please give this approach a chance, by supporting the action.

THIS IS THE ONLY PATH TO PEACE